Black Male Models that are inspiring the community

by Erin Lowry
in Models

Diversity in fashion is always trendy, and now, when Black women are symbolized as beauty after such a long time, why should the Black men be left out.

In the 21 century, many renowned brands are promoting black beauty and playing their sublime role in the positive revolution against Racism. The same concept to beat the skin tone discrimination and to shed some appreciation to these beauties. I am writing this ‘very close to my heart’ writing for you. Here I am enlisting all beautiful Stunning Black male Models for you that have been a symbol of inspiration and beauty. So let’s find out who these beauties are:

Tyson Beckford is one of the most recognizable models and actors. He was recruited to be the face of Ralf Lauren for the first time. After that, he has worked for many major brands.

Tyson was born in New York. Besides modeling, he has done a lot of screen work. Also, You can check him out in the music videos of Toni Braxton’s Unbreak my heart and Toxic of Britney Spears.

He is also cast in a reality Television show; I am a celebrity, Get me out of here. According to Tyson, his reason for working in such a display is for his fans to know that he is more than just good looks.

The first black action hero, Richard Roundtree, is also a former model. He had been a massive help in selling products to black Americans. He worked in different ads for different kinds of products, but the best of all was a Haircare ad. Richard currently resides in New York, and the legend is 74 years old, but still, he can steal the spotlight from any of today’s models.

Fernando Cabral is a Portuguese fashion model that has taken over the fashion world. He is the runaway god, and he also has experience in gracing up the magazines with his marvelous pictures.

He has worked for magazines like Arena Homme+, GQ China, Men’s Uno International, and many more. He always tries to give his 100 % whatever he works on and is making his community proud. He has over 16 k Instagram followers and all in love whit his shiny black Bod.

Alvin is working with the modeling industry for the past 30 years, and that’s just a drop in the bucket for what he has given to the world.

He is the most hardworking model in the industry. Even after his busy bee schedule, he managed to open up a restaurant and execute it successfully. He also has a fine art industry. Well, that’s a lot of work, but he still handles everything with grace. He traveled the world with the help of his modeling career, and everyone loved him he where ever he went.

Vladimir Mccrary is an American model, actor, and singer with a vast social fan base. He is the whole package of what we have been looking for in Black models. He has this divine vision of emphasizing creating connections with people rather than differences, which we all respect. He posts his sublime poetry on Instagram that everyone loves.

He has worked in a sci-fi movie called the fifth element. He has also worked in music videos with Madonna called Bedtime stories. In fashion, he is best known for his outstanding portraits while working with Jean-Paul Gaultier and Thierry Mugler.

Sterling is an American actor known for one of his top-rated movie called Eyes of Laura Mars of 1978. He has also worked for some other blockbuster films that include Dinah East and Sistemo I’ America e Torno.

He has walked many runways with Pat Cleveland, and he was also a legendry dancer that rocked the floor at disco studio 54.

He died young at the age of 27, but he did lead a full, fulfilling life, leaving his work as an inspiration for his generation and community.

Renauld was one of the firsts as a Black male model to appear on many covers, such as GQ. He was also the first black model whose style was copied to make mannequins. He mostly worked for stuff that promoted society’s elite class, such as Furs, Luxury cars, and grooming products such as colognes and sunglasses. He was also the first African –American model that worked for American designers such as Calvin Klein, Bill Blass, and Donna Karan.

He is also a well-known actor; he is famous for his dazzling performance at Central Park (2017), Guiding light, and Gun hill.

Jason olive is an American black model and actor that swooped into the spotlight when he played this divine role of Joseph in Tyler Perry’s For Better or worse. He also played some side roles in the trendy TV series such as All my children, Bet’s and the game, and Raising Helen. He is definitely the beauty of every age.

Djimon is the top American actor and model. He is one of the Gems that the world discovered very late. He gained his popularity in the old age of his life but better late than never.

He started his career by working as an underwear model for Calvin Klien. After that, it was a soft swift motion for his other projects. He was well recognized for his talent in the industry, and he won the Academy Award for best-supporting actor. He was also nominated for the Golden Globe awards.

Bakay is one of the most talented aspiring black models. He has been represented by many well-known agencies such as Milk Management, Bananas Model, Trends Model, Why not Model management, and Next New York?

He is also representing international brands such as Gucci.

Complete Guide To French Braid And Its Styles

What is Eyebrow Threading? Complete Guide

22 Hottest Exotic Models That Are Dominating the Fashion Industry

6 Apps Every Model Must Have

Who is Pietra Dawn Cherniak? How Did She Meet Billy Bob Thornton And Later, Split Up?

The Untold Truth From The Life Of Denise Milani 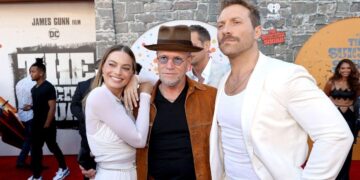 What Is Known About Michael Rooker’s Wife, Margot Rooker?

Margot Rooker is an American actress who has gained additional recognition for being the wife of Michael Rooker. For those...